Col Stephens was Gen Manager of FR in 1920/30s In historical railway engineering circles Col Holman Fred Stephens is an icon. Being the business architect and engineer and various forms of management for no less than 16 railways around the country he built something of a small empire.  It is right and fitting that the plaque has been installed in Tonbridge Station. 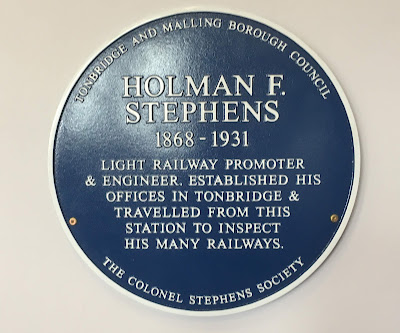 Holman Stephens was a well established engineer and manager of light Railways who had already been material in influencing the legislation that enabled the railway to maintain its independence after “The Grouping” of the main railways. He was recruited by Henry Joseph Jack to help establish the new combined undertaking of the Welsh Highland and Ffestiniog Railways and progressively took over the management of the lines as Jack’s regime failed.
Although used to dealing with railways that were short of capital, the poor state that the FR had drifted into, combined with old established work practices and an under-resourced Welsh Highland, left him with an uphill task in dealing with the massive increase in road competition during the 1920s. Adept at cost control and building tourism traffic, he was however able to ensure that the railway survived a critical period. https://www.festipedia.org.uk/w/index.php?curid=7258

YOUR RAILWAY NEEDS YOU..!OK, slightly dramatic, but - we could certainly do with a helping hand (or two).We are still looking for help during this weekend's 'Beyer Bash' at the Welshpool & Llanfair Light Railway. We have been invited to have an outdoor stand at Welshpool, alongside Beyer Garratt 'K1', to promote the F&WHR and the Statfold Barn Railway.The Marketing Dept. will set up their marquee tomorrow (Thursday), taking literature, etc ready for the weekend. We will also arrange for collection at the end of the weekend. However, we still need ONE OR TWO VOLUNTEERS on FRIDAY OR SATURDAY to help us man the stand, chat about the loco and hand out literature. If anybody fancies a day out at ‘The Beyer Bash’, please get in touch by email to volunteer@ffwhr.com ... See MoreSee Less

UPDATE....Unfortunately, John Wooden has had to withdraw from this weekend's 'Model Railway Workshop', so visitors will be unable to see his new layout under construction.However, we have been fortunate to recruit Paul Martin of EDM Models in his place, who will be demonstrating the process of constructing etched brass locomotive kits.We would also like to thank Footplate of Kidderminster for providing sponsorship for the weekend's workshop. ---------------------------From their website: footplate.co.uk/'Footplate' has been established for over ten years now and continues to grow - going from strength to strength. The business is run by the father and son team of Derek and Richard - both having expansive knowledge of the industry and hobby.We stock a vast range of model railway products from all of the major manufacturers.---------------------------NB: In addition to their brand new stock, 'Footplate' also buy and sell old model railways and model cars - something to bear in mind if you're looking to clear space or hunting for a childhood favourite...MODEL RAILWAY WORKSHOP:21st-22nd MAY...This weekend in the Gweithdy at Minffordd Station, LL48 6HF.Layouts, demonstrations, stalls. Come and chat about model making and pick up some tips.OPENING TIMES:▪️ Saturday, 21st May : 11:00-17:00▪️ Sunday, 22nd May : 10:00-16:00ENTRY:▪️ £3.00LAYOUTS - OPERATING:▪️ Vintage Hornby Dublo Three-Rail - George Brown▪️ Pentrefelin (3mm scale) - Dave Roberts▪️ Ddraig Gwarel (009) - Colwyn Bay Model Railway Society▪️ Poldeen (N gauge) - Robert ShrivesLAYOUTS - UNDER CONSTRUCTION:▪️ Challow Road (O gauge) - Paul TowersDEMONSTRATIONS:▪️ Carriage building - Paul Holmes ▪️ Resin casting - Phil Traxson ▪️ Wagon building - Martin Jones ▪️ Track building - David JohnsSALES:▪️ Nick’s Railway Stuff - Preloved model railway rolling stock, accessories and books. ... See MoreSee Less